We’ve reported on the need for proper propane installation, including vented lockers and leak detectors (“Some Propane Dos and Don’ts,” PS February 2014), but we’ve not taken a close look at small bottles. All it takes is about two ounces on the average size boat to cause an explosion, so these bottles deserve careful attention. (read more below).

The 2020 PYC Cruise travelled Down East this year.

Covid has affected most aspects of our lives and cruising is no different!

In May of this year, we were unsure whether marinas would even be open to cruisers.

However, slowly marinas began to open and we found that almost every port that we planned to visit was going to be open. When prospective PYC cruisers were contacted, all were eager to take part.

We thought about how it would be different this year. Some of us practiced “getting together” at the Isles of Shoals. We did dinghy raft ups to one of our power boater friends and we each brought our own appetizers and beverages and kept our distance. We thought it could work.

We knew that we would spend more time on our boats and much less time eating out.

Overall, we found that most marinas and their personnel were exercising caution, wearing masks, using hand sanitizer and keeping distanced. We tried to do the same.

The pre-cruise from Portsmouth to Rockland consisted of three boats:

The pre cruise stopped at the Tugboat Marina in Boothbay Harbor on the way to Rockland.

The PYC Cruise began with a kickoff cocktail party in Rockland at Journeys End on Sunday, August 2nd and ended in Rockland on Monday August 17th.

A total of eight (8) boats joined in either all or some part(s) of the cruise:

A total of 12 cruisers attended the kickoff party for the Cruise on Sunday August 2nd.

It was held on the docks at Journeys End Marina.

There was much discussion about hurricane Laura and what our destination would be on Monday. At the radio call in on Monday morning we all decided the safest place to go would be Great Harbor Marina in Southwest Harbor, Acadia. Arrangements were made to arrive 2 days early at Great Harbor Marina.

We departed early and encountered some significant seas along the way, but all arrived safely that afternoon.

In Southwest Harbor we found that the owner of Sawyer’s, the hallmark food market in Southwest Harbor since 1946 had retired and the market was closed. Also, the  buses that travel all over Acadia including Bar Harbor, were not running. Some of our dinners were cooked on the deck at Dysart’s marina. On Thursday of that week, Carole and Cody Cartnick and Sherle Edwards provided us with a wonderful chili and cornbread dinner, taking all sorts of safety precautions, which we appreciated. We enjoyed the dinner and cannot thank them enough for providing the PYC cruisers with this dinner and for their tremendous support of the PYC Cruise and its cruisers.

On Saturday we traveled to Bucks Harbor in Brooksville Maine. There we had a dinghy raft up – all of us tied up to Semper Fi! We each enjoyed our own appetizers and beverages in the comfort of our dinghies!! We also enjoyed Roy Briscoe’s drone as it flew around Bucks Harbor taking some phenomenal photographs.

From Bucks Harbor we traveled on Sunday to Castine. At Eaton’s, Kenny and his daughter Suzanne cooked lobsters for us and we enjoyed them on their big deck.

On Tuesday August 13th we travelled to Belfast where we met up with Running Spirit.

We enjoyed some outside dining in Belfast and the ladies spent time shopping.

From Belfast, we traveled to Cradle Cove on Islesboro. The incredible sunset and the stars were the highlight of the evening we spent there.

On Friday we traveled to Camden and spent two relaxing days there. It was sad to see some of the schooners covered up as many of the windjammer cruises had been canceled.

The Cruise officially ended on Sunday in Rockland. Three boats continued on, slowly making their way back to Portsmouth, stopping at Boothbay harbor, Five Islands and Biddeford Pool.

Amber Sea joined in at Five Islands and Biddeford Pool.

All in all, and despite the challenges that COVID brought, the PYC cruising group enjoyed a great trip Down East, with great weather and great camaraderie, even at a distance!!

It is a great time with a fun group — we invite you to consider joining all or part of the PYC Cruise next summer!

The 2019 PYC Cruise traveled Down East this year.

Our pre cruise dinner and planning session was on Sunday June 2nd at PYC where we had 23 Cruisers attending.

The pre-cruise from Portsmouth to Rockland consisted of three boats:

In Boothbay Harbor, Bill and Sandy Miller came by land and hosted a cocktail party for the cruisers in their room at the Tugboat Inn.

A total of seven (7) boats joined in either all or some part(s) of the cruise:

A total of 14 cruisers attended the kickoff party for the Cruise on Sunday August 4th.  It was hosted by David and Nancy McArdle, Pat Daly and Roy Briscoe and held on the docks at Journeys End Marina.

We departed Rockland on Monday August 5th, and our first port was Belfast, where we stayed for 2 days. Ladies enjoyed visiting the shops in downtown Belfast and all 12 of us enjoyed dinner at Delvino’s restaurant. We were happy to have Pat Daly and Roy Briscoe (Barefoot Children) join us by land both in Belfast and later on in Southwest Harbor.

From there 5 boats travelled to Castine. We enjoyed a cocktail party hosted by George and Nancy Kinser and a lobster dinner cooked by Kenny Eaton of Eaton’s Boat Yard.

From Castine we travelled to Bucks Harbor in Brooksville Maine. There we enjoyed a potluck get together on the deck at Bucks Harbor Marine. An interesting side story: Betsy Bonde had met a couple from Switzerland, named Martin Rohr and Denise Mussato who had sailed their 41 foot steel hulled sailboat from Switzerland to the United States approximately 5 years ago. Since then they have been sailing their boat on the east coast here every summer. This summer they came to the Portsmouth area and stayed on a mooring at PYC. Betsy got to know them, took them to the grocery store and told them about our cruise. They joined us at our potluck in Bucks Harbor and again when we were in Southwest Harbor at Dysart’s Marina.

They fit right in and we enjoyed their company.

This mainly racing Yacht Club closes at 6pm but as their guests we were able to use all their outside facilities – tables, chairs, grills etc. The Jones’ and Wells’ hosted a cocktail party there.

It is a truly beautiful spot and we always enjoy stopping there.

On Monday August 12th we travelled toward Bass Harbor Light and then up Western Way to Southwest Harbor and Dysart’s Great Harbor Marina.

Guests of the PYC Cruise, Wendy Keller and Bob Martin on their motor vessel Eclipse, joined us for 2 nights at Dysart’s. The first evening they provided hors d’oeuvres for the group.

Following that, Carole and Cody Cartnick and Sherle Edwards provided the Cruising Group with a wonderful homemade Chili and Corn Bread Dinner, complete with dessert! This has become somewhat of a tradition that we really look forward to!

The following evening, we had 19 of us for dinner on Dysart’s deck. We purchased lobsters at Beal’s Lobster Pound and cooked them up on the deck at Dysart’s. Our friends from Switzerland, Martin and Denise joined us for the lobster dinner.

On Friday August 16th we travelled to Camp Island, near Stonington.

There were 4 boats and we got together that evening for potluck on Peter Rabbit.

On Saturday August 17th we travelled to Rockland Maine, where we met up with Running Spirit. We got together for dinner at the Landings Restaurant in Rockland.

The Cruise officially ended in Rockland. On Sunday four boats headed to Boothbay Harbor, encountering some fog early on in the Muscle Ridge Channel. The fog did clear, and it turned out to be a beautiful day. Eight (8) of us had dinner together at the Ports of Italy restaurant in Boothbay.

Our post cruise dinner was held on Sunday September 8th at PYC. 19 cruisers attended. We shared an assortment of wonderful food and also shared pictures of the 2019 cruise.

All in all, the group enjoyed a great trip Down East, with great weather and great camaraderie.

It is a great time with a fun group — we invite you to consider joining all or part of the PYC Cruise next summer!

CRUISING HISTORY: A LOOK BACK AT 20 YEARS AND 20 PYC CRUISES 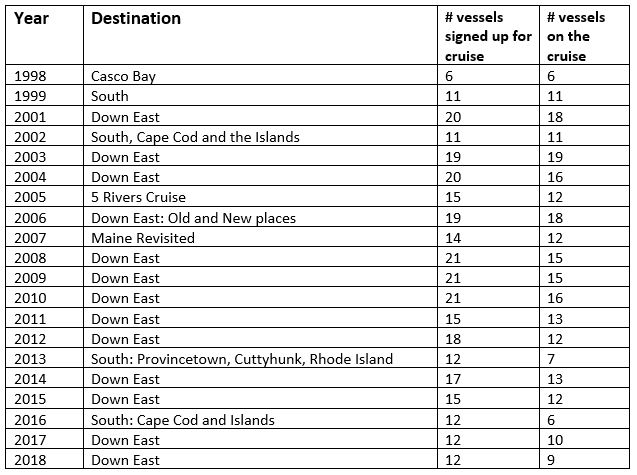 Look for Cruise information to come for the 2019 boating season!

The PYC Fleet is comprised of both power and sail vessels. The length of vessels is anywhere from 26 to over 50 feet. We enjoy great camaraderie  and through our cruising adventures, have formed long lasting friendships. Consider joining us either by land or sea (preferred!)

Please do not hesitate to contact me with any questions.