Located in New Castle, New Hampshire the Portsmouth Yacht club was founded in 1898 and has a club house located on the Piscataqua River in Portsmouth Harbor just off route 1B near the center of New Castle.  We have guest moorings on the river and in Pepperrell Cove which is across the harbor in Kittery Point, ME.  Map 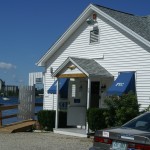 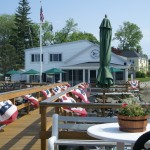 The Piscataqua River is frequented by freighters heading to Portsmouth and Newington NH and is the home of the Portsmouth Navy Yard in Kittery, ME.

We follow in the tradition of some other famous yacht clubs, in that we are not located in the the town the club is named after, like the Boston Yacht Club in Marblehead, the New York Yacht Club in Newport RI and the Kittery Point Yacht Club (KPYC) in New Castle. If you happen to see KPYC on the port and the Navy Prison on the starboard, it looks like a castle, you went by PYC.