PYC sponsored the annual Dave Mowers Memorial Cup which was the 4th regatta in the Commodore’s Cup Series. PYC’s policies to maximize member safety prohibited congregating for the usual pre-race meeting, dockside pursuit formatted start/finish officiating and post-race festivities. Many thanks to Tom Schladenhauffen of PSA and KPYC for hosting the pre-race meeting, as well as Tom Brown officiating from Chumly on a PYC mooring. We look forward to PYC hosting next year as Ann Mowers’ Chowder and hot dog feast was missed by all.

The two PYC captained boats attending the Gossport Regatta were:

PYC hosted one race this year, the annual Dave Mowers Memorial Race which was the last regatta in the Commodore’s Cup Series. It was unfortunate that race sponsor Ann Mowers was unable to attend, her presence was missed, and all wished her well. Race Committee and sous chefs were Chris and Whit Weller. Pat Daly, Roy Briscoe and others graciously volunteered to help prepare and serve our guests.

High seas caused a postponement from 9/7 to 9/14. Unfavorable tides prohibited the usual PYC starting line, the pursuit regatta began at 11:15 at Gunboat Shoal Buoy. With seas 2-4 feet and gusts of 20 knots, sails were reefed and the winning time from Gunboat to Rye Harbor to IOS1 to gunboat (11.4 KTs) was 1:45:46 (Defiant). Entrants enjoyed an afternoon of PYC hospitality complete with chowder, hotdogs and Dark and Stormy’s from 3:00-5:00PM. In good fun, the prizes were auctioned off with proceeds going to the Portsmouth Sailing Association. 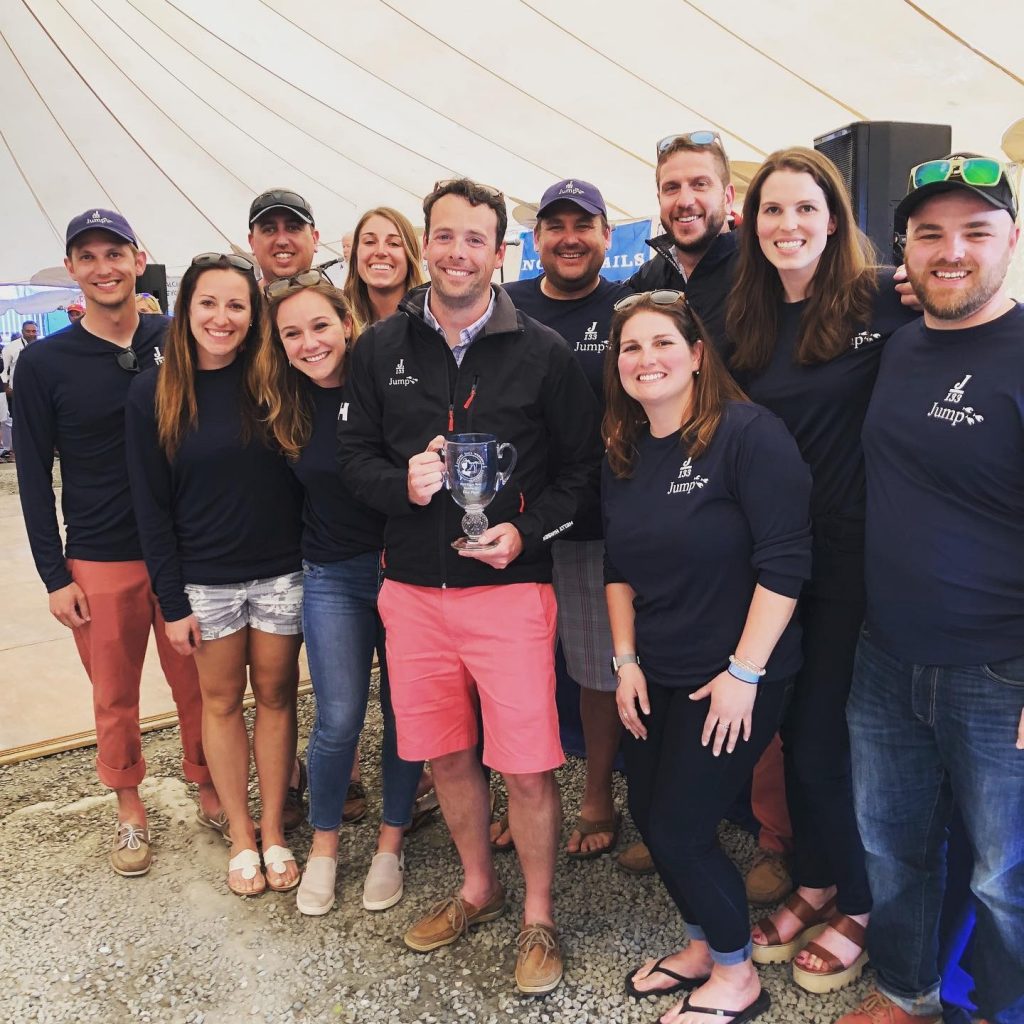 Chris Lund and the crew of Jump

PYC’s Chris Lund has won Division S1 of this year’s Figawi aboard his J133 Jump!

Chris states:
“After 5 years of racing the Figawi each Memorial Day
we won the Division S1!
The race was roughly 27nm from Hyannis to Nantucket and we passed NYYC’s Alchemy on the last leg to win the race by a margin of just under 3 minutes.”